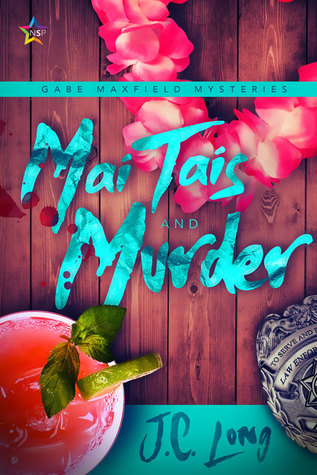 Gabe Maxfield never wanted to be a detective or a policeman or anything of the sort. The closest he wanted to come to the law was writing legal briefs and doing research for a big-shot law firm. Nice and safe, and without all the stress. No unanswered questions, just well-defined legal precedents.

When he moves to Hawaii in the wake of a disastrous breakup and betrayal by an ex, a murder investigation is the last thing he expects to get wrapped up in, but he can’t help himself when a dead body, a hunky cop, and his best friend get involved.

So much for sipping Mai Tais on the beach and admiring the well-tanned bodies around him.

Mai Tais and Murder is the first book in the Gabe Maxfield Mysteries series.  If this story is anything to go by I will have to keep my eyes open for the rest of the books.  I really liked Gabe.  He has a bit of the snark factor going for him which made me smile at times.  He has recently gone through a rough break up and the only choice he saw for himself was to move to Hawaii where he will be closer to his best friend, Grace.  It is through his friend, Grace which Gabe finds himself pulled into a murder.

The other M/C in Mai Tais and Murder is Maka Kekoa.  Maka is a detective with the police department.  He is also Gabe’s new neighbor.  While they had a brief introduction as Gabe was trying to talk to the movers, Max and Gabe are brought together again by the murder of Grace’s partner.  While there is not the “love at first sight” feel to the book, there is an attraction between Gabe and Maka that grows as the story progresses.  This ends up making things difficult for both men as Gabe is drawn increasingly into the murder investigation that Maka is officially involved in.  I liked seeing these two try to figure out just want kind of relationship they are forming, as neither man is ready to admit they want to get involved in anything serious.  Although I loved the romance aspect of this story, the mystery woven though out it is just as engaging.

When Grace’s partner is found died, Grace becomes the suspect and Gabe goes out of his way to find out what is really going on.  The author did a fantastic job holding my interest during the book and more than once I worried about how Gabe would react if Grace turned out to be the murder. I liked the little twists and turns and the fact that the author kept me guessing was a bonus.  For me the story was wrapped up perfectly and I cannot wait to see what the rest of the series will look like.

Noah Potter has come to Hong Kong to find his missing sister, Lianne, who disappeared after leaving him a voice mail pleading for his help. Unfortunately, the Hong Kong police are unwilling to help him, so Noah has to find her himself.
Noah’s search for his sister brings him across Wei Tseng, leader of the Dragons, a group of dedicated men and women willing to do whatever it takes to keep their district safe from the violence and triads that plague the rest of the city’s underworld. Wei is a man of violence but also one of incredible compassion, and his history is one that resonates with Noah, igniting a passion neither man expects.
Together they search for Lianne, a search that will lead right into a conflict with the Dragons’ greatest rivals in the city.

A Matter of Duty, the first book in the Hong Kong Nights series, is my first book by author J.C. Long, but it will not be my last. The author pulled me into the story from the very first page and my attention stayed on the book till the very end.

Noah comes from a rich but dysfunctional family. The only one he is close to is his sister, even though they are two different people. When his sister goes missing while traveling around Hong Kong, Noah takes off to make sure that everything is being done to find her. Noah is out of his comfort zone from the beginning. Nothing is like he expected and he fears he will never find his sister alive.

Wei is leader of the Dragons, one of the many gangs that run Hong Kong’s underworld. Wei, and the other Dragons, are different from the other gangs. True they are violent but that violence has a purpose. When girls in his district go missing, only to be found dead later, Wei and the Dragons are determined to find out who is behind it.

It is during this time that the two men are thrown together. Readers will see the attraction that exists between the men from the beginning. Although the circumstances are far from normal, I liked watching them come together and grow as a couple. I also liked the way Noah stands by Wei even though he skirts the law and occasionally crosses the line.

The mystery aspect of this story is also very well written and one that will keep the reader turning the pages to see what is going to happen next. There is so many twists and turns and I do not want to give anything away, but I will say that there were many parts that I did not see coming. While parts of the mystery are cleared up, and Noah and Wei have their HEA, not everything is resolved.

I cannot wait to see what happens in the next story, and as there are several members in the Dragons, I hope this series has many more books to go.