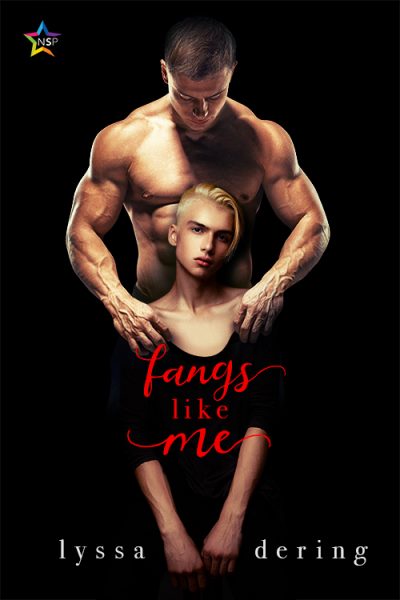 Lane, a newborn vampire, still feels the pain of betrayal. Two years ago, a faithless boyfriend took his life, and now, Lane’s Maker has also left him behind. The pain of separation burns strong when all Lane wants are arms to hold him and enough warm blood to satisfy his voracious appetite. At a shifter party, Lane is drawn to a hunky Alpha werewolf who tries to console him.

Parker is more than a thoughtless hookup. Since his family disowned him for finding boys just as hot as girls, all he wants is someone to love and look after. The sweet little vamp calls to his protective instincts, but he sure is jumpy. Cuddling with boys is new and delicious, but when this boy also wants him as a food source, things get complicated.

Vampires and shifters aren’t supposed to get along, and Parker’s rough dominance triggers bad memories for Lane. But Parker’s wolf wants Lane, and he knows he can give Lane what he needs. Can Lane learn to navigate his past and give the thing growing between them a chance? Or will the very real possibilities of heartache, abandonment, and even death, keep them apart?

Fangs Like Me is the first book I’ve read by this author and it won’t be my last. I really enjoyed the dynamics between the characters and the world they lived in.The blurb does a great job describing the story so I won’t rehash it. Instead, I thought I’d write about why I liked this book and why I recommend it to those who love a well-written paranormal romance.

Lane is considered a very young vampire. He has only been turned for a couple of years and still has a lot to learn when it comes to living and surviving as a vampire. Though he lives in a home with other established and older vampires, Lane suffers greatly because his maker has left him and has no intention of coming home anytime soon. Because of this, Lane lives with the thought that his maker doesn’t care for him and in many ways he feels unwanted and unloved. He truly struggles to live with the newness of being a vampire and is often confused and emotional because of it.

Sparks fly when Lane meets Parker. This is a surprise for him because Parker is a shifter…and an alpha shifter at that and in many ways any kind of relationship between them is forbidden. But, Parker is just as drawn to Lane and feels a deep connection and need to take care of the young vamp. As the two men begin to allow their guard down and get to know each other, they are soon faced with the difficulty of being with someone who is not the same species and some of the prejudices from it.

I liked this book a lot. I enjoyed the chemistry between Lane and Parker. It was easy to believe that they genuinely care for one another and I liked the way their relationship develops as the story unfolds. Parker really looks out for and takes care of Lane. I thought that was both sweet and an endearing part of his character.

The only reason why this book is not a five kiss read for me is because there is some things that were left unresolved. Also, I really would have loved to more about the backstory between the characters. (Parker in particular) In my opinion, this book needs a sequel BADLY. Plus, Parker is NOT immortal…so I see that as a problem in the future. There were many loose ends that needed to be resolved for me, but having said this…I really liked this book and I hope the author continues their story.

Fangs Like Me is a well-written, thought-provoking story with a fresh take on a paranormal romance. I loved the creative storytelling ability Ms. Dering has and can’t wait to read more
stories by her.