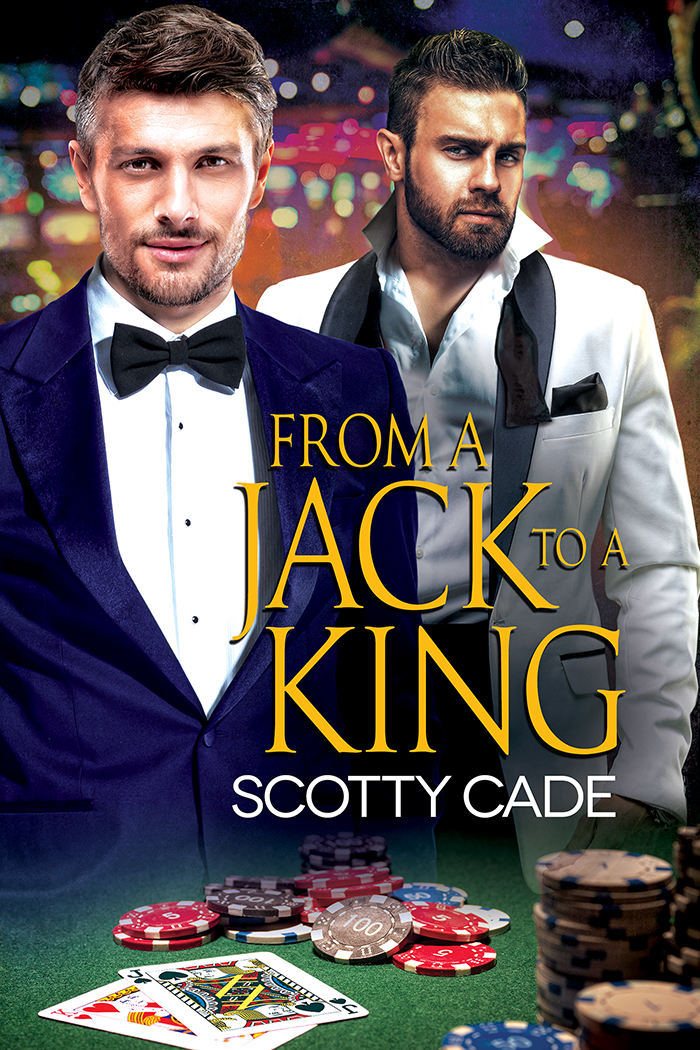 Title: From a Jack to a King

New York Times best-selling mystery writer Bay Whitman leads the life of a celebrity—at least on the surface. In public he’s self-assured and in control. Women hang on his every word, while men envy his confidence and swagger. But in reality, Bay is a loner. He’s shy and introverted, and his life consists of sitting in a dimly lit room writing his famous Jack Robbins mystery novels. His one vice—gambling. Winning an escort in a poker game will change Bay’s life in ways he never imagined.

Matthew “King” Slater is one of the hottest tickets in gay porn. He spends his days in front of the camera and his nights as a highly paid escort to the rich and famous. Deep down, he craves romance and a real connection, but his past makes it hard to separate the needs of his body from those of his heart. For now, it’s easier to think of sex as just a job. But while doing a shoot in Vegas, King is hired for a tryst at a famous hotel and casino, and his handsome client might blur the line between work and play.

I just finished reading From a Jack to a King and all I can say is, Whew! Scotty Cade can write romance! There is something special about the way his heroes connect with each other that really make his stories a well-written, beautifully told romance.

Here’s the thing about King. He is a very complex character. As more about him is revealed, I began to really care for him. I liked how Mr. Cade did not sugarcoat his character or some of his behaviors at all. Why? Because watching King’s personal growth and how hard he falls for the sweet, intelligent and sexy Bay was a heartwarming thing to experience.

I understood why King fell so hard for Bay. Bay is a genuinely nice guy. He has a knack for poker, he’s a very successful writer and is an all-around likable guy. But, Bay is a very introverted man who is afraid to open up and allow people to see who he is on the inside. When he meets King, Bay is challenged to take a hard look at himself, as well as, allow himself to be opened to new possibilities.

I loved this book. Yes, there were times I wanted to strangle King, but those moments were few and far between. As a reader, I appreciated the way these two men learn to communicate and open their hearts and minds to one another.

I also loved the difference between King going through the motions at his job vs making love with Bay. Yes, there was a significant difference between it, and I was swept up in how each touch King and Bay shared between them was a loving, beautiful one.

I love romantic tales that sweep me up into the lives of complex, sexy, intelligent men who clearly are made for one another. Mr. Cade is a master storyteller and I adored every moment I spent reading this book.

Click HERE to read my review of An Unconventional Courtship by Scotty Cade. *It’s one of my all time favorite reads*