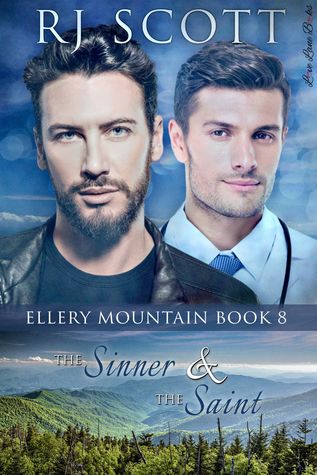 TITLE: Ellery Mountain, Book 8: The Sinner and The Saint

Army medic Ben Rockwell is in Ellery to work with the Veterans Center creating a new specialist unit for post trauma care. Desperate to make amends for battlefield decisions he regrets, he is focused on the unit and nothing else. Until some stranger moves in next door and throws him a curveball. He’s no hero, even though everyone says he is, and the lies burn inside him.

Leaving drama and chaos in his wake, Nicholas Merrick fled London and is hiding out in his friend Jason’s house, until everything back home dies a death. The choices he made in his life were to keep his best friend safe, but as a result everyone sees him as the bad guy.

When these two meet, the attraction is instant. Can they ever be their true selves, and find love as a result?

This is the first RJ Scott story I’ve read, and I really enjoyed it. Ellery Mountain is a series where each book centers on a different couple, yet those from previous books turn up in later books too.  I love this kind of series as it brings with it a mix of meeting new people, yet still checking in on previous characters.  As seems to be a trend with me of late, I’m starting with the latest book in the series so need to play catch up.  Needless to say, jumping into the series at this point wasn’t detrimental to my enjoyment, apart from leaving me with a feeling of ‘oooh cool, more books to read.’

Nick and Ben are both interesting characters dealing with the consequences of their pasts.  When I started reading the book I thought The Saint referred to Ben as he is nicknamed that by the community, but as I kept reading I changed my mind.  I think he is The Sinner, at least in his own mind, and Nick—because of his actions in regard to his best friend—is the Saint.

Ben was a harder character to warm up to, but that makes sense as he is struggling to come to terms with his past, and the PTSD that still affects him.  There were times when his attitude to Nick and bluntly asking for sex seemed a little out there, but I thought it worked because of his background.  His coldness, bluntness, and not wanting to make an emotional connection make sense, and I thought the author did a great job in writing his mindset, and slow thawing as he realizes he wants more than just a physical relationship with Nick.

I liked Nick immediately, and his stay in Ellery doesn’t get off on the greatest start.  His inner monologue was amusing and I’m always a sucker for a British character.  I liked the way he and Ben warm up to each other as friends, and that it does take a while.  I loved the way Ben acted protectively toward Nick, even before he admitted how he felt. Actions say more than words and all that.

The supporting cast was great, and I loved the characters who populate the town, apart from one woman to whom Ben gives a piece of his mind. The town felt very real, I could imagine it easily, and I hope there are more books to come in this series, especially as I suspect someone new to this book needs his own happy ending.

I’d recommend The Sinner & The Saint to readers who enjoy light, sweet, contemporary romances with interesting characters, and a great supporting cast.