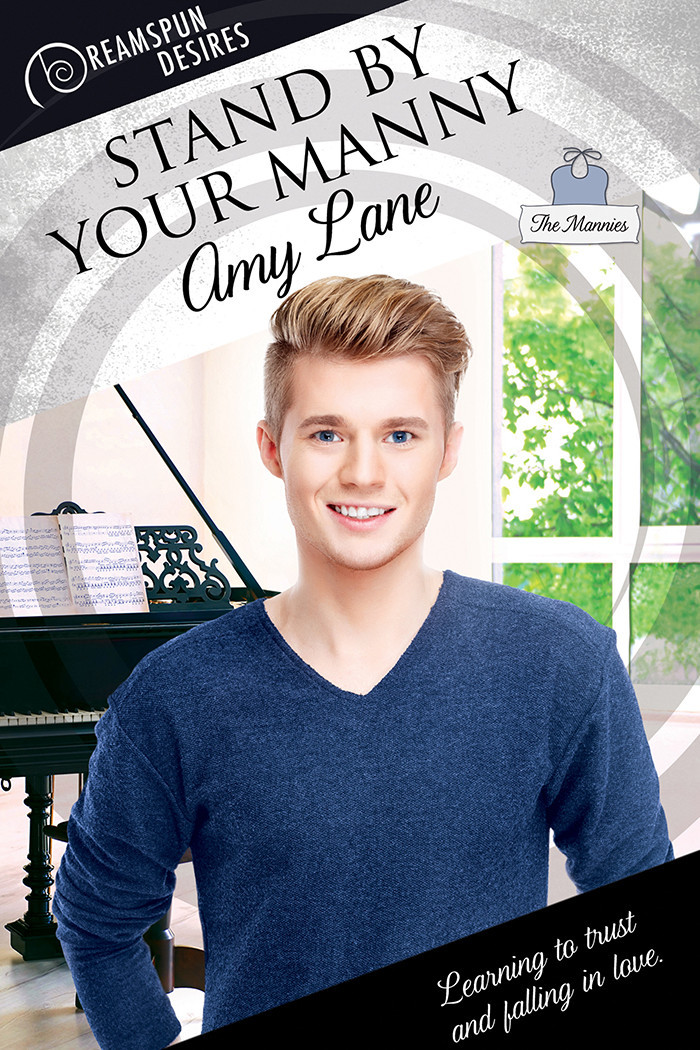 Title: Stand By Your Manny

Learning to trust and falling in love.

Sammy Lowell has his hands full juggling his music, college, some pesky health problems, and making the uncles who raised him proud. He needs help fulfilling his after-school duties with his siblings. Nobody can be in two places at once—not even Sammy!

An injury puts Cooper Hoskins in a tough spot—if he can’t work, the foster sister he’s raising can’t eat. But years in the foster system have left Cooper short on trust and opening up to accept help isn’t easy.

Luckily, family intervenes—Cooper needs a job so he can care for Felicity, and Sammy needs someone who can see past his illness to the wonderful things he has planned for his life. Each heals the damaged places in the other’s heart. But falling in love is a big responsibility for young men deep in family already. Can the two of them get past their fear of the immediate future to see forever with each other?

Stand by Your Manny is book three in Ms. Lane’s The Mannies series.  Because of who one of the main characters is, and the connection to the secondary ones, this is a series that needs to be read in order.  Fans of this series are really going to love this book.  Sammy, the little boy we met and loved in book one, is now a young man and ready to strike out on his own.  Only things are not going to be as easy as he hoped.

Life for Sammy has changed since we last saw him.  As a teenager, Sammy began to have health issues that still control his life today. Not only does this make Sammy insecure in some ways, it has also made his family, especially his fathers overprotective.  When Sammy has the possibility of teaching at an inner-city school as well as playing his music in a bar during the evenings, his parents make a compromise.

Sammy can teach, but no playing at the bar. They will also have to find a manny to take care of the younger children since Sammy won’t be able to do it.

Cooper grew up in the foster system and when he aged out he knew life would be hard, he just did not understand how hard.  When the foster sister from his last home showed up on his doorstep Cooper did the only thing he could do, he kept her.  The young man does everything he can to keep the authorities from showing up on his doorstep.  When Cooper gets hurt on the job he learns to ask for help from his friends.   Getting a job as a manny will pay more and allow him to take better care of his sister, it also brings him into contact with Sammy.

Fans will love the slow-burning relationship that grows between the two boys.  Both young men are worried about being hurt, should they misread things, and so are unsure how to act on what they are feeling.  Watching them find their way was fun and it is easy to see just how much they care for each other.  I also loved the way Sammy’s fathers react to the budding relationship between these two young men.  I had to laugh at the condom story but felt so bad for Sammy at the same time.

Many previous characters play second fiddle in Stand by Your Manny.  The strong feeling of family that was present in the first book can be found in this one as well.  This is just one of the many reasons why I love these books.

The Mannies series is one that readers will enjoy.  Ms. Lane brings each story alive for the readers in a way that will keep them turning the pages.  I am looking forward to the next story and can’t wait to see what the author has planned.