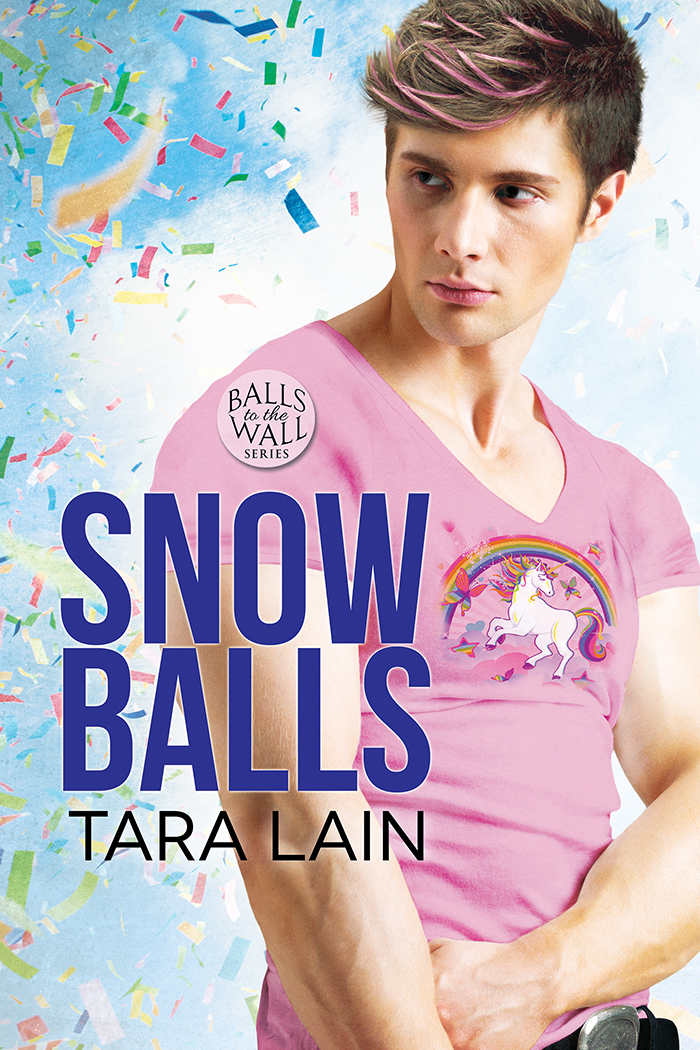 JJ LaRousse looks like a quarterback but acts like a queen. He’s trying to be proud of who he is—until a robbery at the famous Laguna Winter Fantasy brings JJ face-to-face with tough cop Ryan Star. JJ hears Ryan likes manly men, so he drops his voice an octave, colors his pink hair, and tries to pass as a football fan.

Ryan Star may be tough, but he keeps his sexuality to himself at work. He learned in New York that being a gay cop can be deadly. His attraction to JJ threatens his secret, but he’s finding it hard to back away from a guy who’s so totally his type. Then, during a ski trip and a confrontation with JJ’s biggest nemesis, all the façades come crashing down. In the aftermath, can Ryan love JJ for who he really is? More importantly, can JJ?

Tara Lain is back with another Balls to the Wall romance, Snow Balls. If you’d like to read all the novels released thus far, the order is as follows:

This time around, we get emerging interior designer, JJ LaRousse, who is longing to get close to Detective Ryan Star after a robbery at the Laguna Winter Fantasy Art and Craft Show brings them into each others’ lives. The problem is that Ryan appears to only go for manly men, so JJ puts on a front and tries to get his man. It’s a good run while it lasts, but soon the lies become too much. Being true to yourself is the only way to live, even if it means losing the man of your dreams.

While I liked JJ and Ryan’s emerging romance, despite Ryan’s need to keep it hush-hush, I did find the push and pull to be a bit strained at times. JJ doesn’t want to be in the closet, because he’s already escaped, and Ryan isn’t quite comfortable being out at work. This should have been the end of the conversation – a sad end, but an end nonetheless. However, there’s still more in store for them.

A threat to Ryan’s safety brings JJ right back to his arms, and still they keep it quiet with JJ playing his role of ideal manly-man with interests in football and skiing. The fact that their relationship fractures not for the fact that Ryan is in the closet at work, but because of JJ’s fibs were a bit difficult for me. However, that problem is quickly swept away when there’s another threat to Ryan’s safety, a heroic save by JJ, and a happy ending for them both.

If you’re a fan of the Balls to the Wall series, by all means, pick up the latest addition. It might not have been my favorite of the books thus far, but it’s still a nice holiday romance that holds the promise of what-may-come.