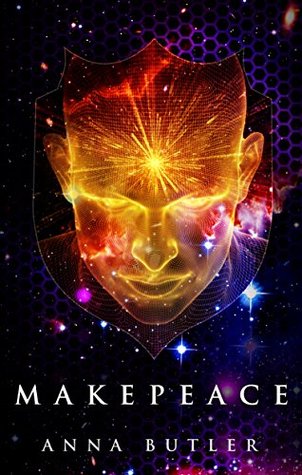 Returning to duty following his long recovery from the injuries he sustained during the events recounted in <i>Heart Scarab</i>, Shield Captain Bennet accepts a tour of duty in Fleet as flight captain on a dreadnought. The one saving grace is that it isn’t his father’s ship—bad enough that he can’t yet return to the Shield Regiment, at least he doesn’t have the added stress of commanding former lover, Fleet Lieutenant Flynn and knowing the fraternisation regulations will keep them apart.

Bennet’s new mission takes him behind the lines to Makepeace, once a human colony but under Maess control for more than a century. The mission goes belly up, costing Albion one of her precious, irreplaceable dreadnoughts and bringing political upheaval, acrimony and the threat of public unrest in its wake. But for Bennet, the real nightmare is discovering what the Maess have in store for humanity. It’s not good. It’s not good at <i>all</i>.

One of the things I really like about this series is that there are consequences.  After Bennet is injured in the previous story, he doesn’t just snap back into action, but spends months recovering from his ordeal.  I enjoyed seeing more of Bennet’s relationship with his family in this story, plus his building bridges with his father. I felt for Bennet and Flynn and that they couldn’t be together—so tragic on both sides. I thought the imagery the author used for that worked nicely.  Bennet’s sister being assigned to the Gryfalcon added another level of awkwardness to an already awkward situation.  I also liked Rosie as a character and really felt for her and the situation she finds herself in. I think she makes the right call in order to stay true to who she is.

There is a bit more about the background of their world in this story, too, which I enjoyed. The links to Egyptology is great, and it’s obvious the author has a passion for the subject.

But as with the previous books in the series, this is an action SF story in which the protagonists happen to be gay, and I thought the author balanced the relationship and story well.  The storyline with the Maess kicks up a notch, and I was horrified by certain parts of it. I liked the contrast between Bennet’s reaction to that of the Caliban’s crew to what is going on. Bennet’s guilt as to what he has done comes across very clearly, and I like the fact that it’s not going to go away anytime soon.

Another thing that kicks up a notch is the political agenda.  Kudos to the author for writing such politically driven people that I disliked with a passion almost immediately.  She doesn’t pull any punches and I was turning pages quickly needing to know what happened next.  The story asks some very realistic ethical questions, and I found it very thought-provoking.

I’d recommend Makepeace to readers who like a solid action packed military SF story with well developed world building and characters, and a plot that makes you think.