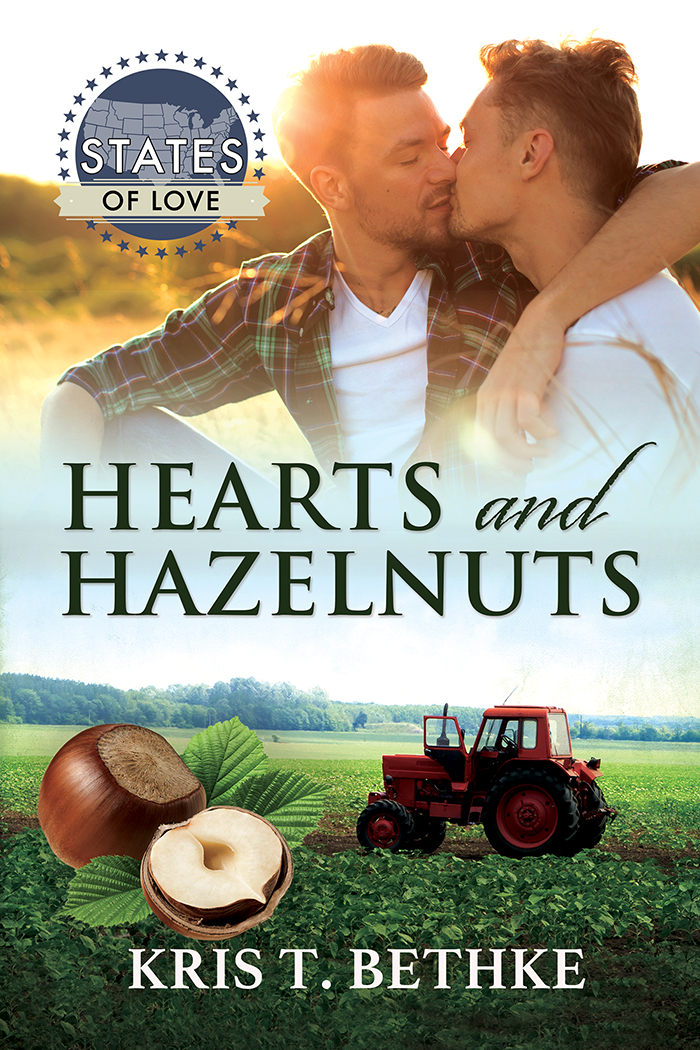 Mechanic Jordan Hart is down on his luck, so he gladly accepts a temporary job servicing tractors at a hazelnut farm in Newberg, Oregon. He doesn’t expect to be attracted to his boss, Beckett Shaw. Still working on embracing his bisexuality, he’s reluctant to start anything, but Beckett’s gentle coaxing convinces Jordan to take a risk.

Beckett has vowed not to get involved with anyone until he can restore the Shaw Farms name as a leader in hazelnuts. But there’s no denying his interest in the shy mechanic who shows up at his door. Just as they begin to find a balance, outside forces threaten to tear them apart. Job opportunities force Jordan out of the Portland area he loves so much. But when danger comes too close to Beckett, Jordan must decide if he can follow his heart to the Willamette Valley… and straight back to Beckett.

With Hearts and Hazelnuts, we get another entry into the States of Love series – this time set in Oregon. The story centers around Jordan and Beckett’s emerging relationship, while also balancing a threat to Beckett’s farm, a few side characters whose stories are mostly heard rather than seen, and a promise that everything will work out in the end.

The two main characters, Jordan and Beckett, had their relevant backstories fleshed out enough to support the story and allow us to root for their eventual success. We got the typical “both are interested, but don’t know the other is as well” teases before they embarked on their mutual passion, along with some hints that there was more going on in their histories than we got a look at. I’m curious to know more about Jordan’s relationship with his parents, as well as Beckett’s relationship with his dad. There felt like there was much more to say on both those fronts, but perhaps that’s best left for another visit back to these characters and their future together.

Jordan’s brother, John, and the farmhand Cory were two more characters that I wanted to know a bit more about, but we only got glimpses of them. To be honest, when the explanation of who had been helping competitor Homer Gagnon harass and vandalize Beckett’s farm, I was fully expecting it to be Cory’s estranged boyfriend instead of bringing in a whole new character. But maybe that would have been a bit too neat and tidy for the story. In the end, we did get a solid explanation of why it happened, how all the characters fit together, and a promise of a bright future for them all as they worked together and remained close to one another.

If you’re looking for a story that gives you a bit of mystery, some quiet wondering if the two characters will work out, and a promise that there is more in store for Jordan and Beckett, then Hearts and Hazelnuts is for you. I still hope that we can revisit these two again sometime soon, because I want to know what else they’re getting up to on the hazelnut farm!