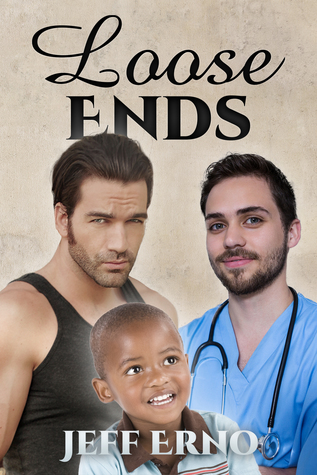 Homicide detective Tucker Brown hasn’t always made the right decisions, but one thing about his life he’ll never regret is his son Jaydin. While at the hospital for his four-year-old’s tonsillectomy, he encounters Jaydin’s nurse, Ivan Ramsey. Tucker is taken aback, however, when he discovers he’s been assigned to investigate the potential murder of Ivan’s mother.

Ivan Ramsey is a pediatric nurse, and he loves his job more than life. Raised in a devoutly religious family, he’s not yet out to a lot of people, but on the very night he chooses to come out to his mother, she dies tragically in a house fire. Devastated by the news, Ivan all but falls to pieces, and to make matters worse, a cocky, know-it-all police detective shows up asking nosy questions. The cop implies his mother’s death might not have been an accident and even infers a family member might be responsible.

Tucker and Ivan at first clash. Their strikingly different personalities are oil and water, but soon they begin to work together to determine the real cause of Ivan’s mother’s death. In the process, sparks begin to fly and a romance ignites. Ivan falls hard, not only for the sexy detective but also his adorable son. Tucker, equally smitten, has made some discoveries he can’t yet reveal to his lover. There are so many loose ends and unanswered questions for both of them, and when the truth finally comes out, it just might tear them apart.

I have long been a fan of Jeff Erno’s works, as well as kid-fics, so Loose Ends was right up my alley. Combining a budding romance with a criminal investigation made for an exciting and satisfying journey as we saw the main characters go from bristling to kissing. And I’m left wondering where Tucker and Ivan will go next.

The characters in this novel, from the main to the secondary, were all fleshed out very well and presented as three-dimensional people with flaws and all. I like when an author achieves that in their writing, because it makes it all the more real and allows me to align with the characters better. And because the POV switches between characters, which initially I was not a fan of, we get an inside look at what they’re feeling and thinking as they navigate this wild adventure.

We saw how Ivan and Tucker’s backgrounds were different in the way they dealt with their sexuality, and also how misconceptions between the two of them might have cost them a relationship before they even got started. Ivan doesn’t like gay men who hide their sexuality and marry women as a cover, which he seems to assume Tucker did. But, as Tucker explains, he wasn’t using his best friend-turned-wife as a cover, since he hadn’t been true to himself at that point either. Tucker’s ex-wife and his son also played a nice role in welcoming this new love into their family dynamic, which I enjoyed. No need for romantic drama when there was plenty of legal drama in play.

I appreciated that Tucker had to balance his emerging relationship with Ivan against his duty as a police officer, investigating the murder of Ivan’s mom. The mystery was a bit easy to solve from the reader’s point of view, but Erno managed to show how the case evolved with all the clues being put into place. Admittedly, Tucker sometimes blurred the lines just a bit and did things that weren’t strictly unbiased because of his love for Ivan, but in the end he managed to solve the case and get the guy. I’d say that’s a win-win all around.

If you’re looking for a feel-good story with a bit of mystery, this is the book for you.