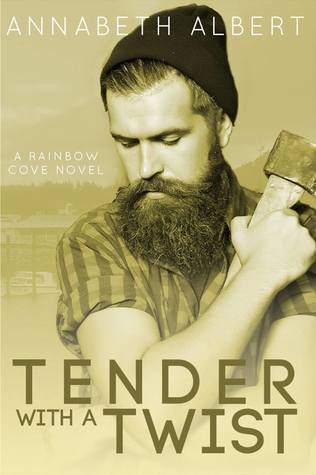 One kinky wood carver. One younger chef looking to try new things. A series of lessons that bring both men more than they bargained for…

Curtis Hunt has made a name for himself as a chainsaw wood carver, winning national competitions and operating a small business in Rainbow Cove, Oregon. As winter whittles away his tourist traffic, his goal is just to survive the season and try to not get lost in grief for his dead lover. It’s been two years, but he’s sure he’ll never be over the love of a lifetime. However, his body has a certain restlessness that he doesn’t quite know how to calm.

Logan Rosner knows a thing or two about restlessness. It’s what drove him to Rainbow Cove to be a chef at a bar and grill run by his friends. And it’s what drives him to a single sizzling encounter with the local legendary lumberjack. Both men get far more than they expected and learn that first impressions aren’t always accurate…

But when Logan proposes a series of sexy lessons, Curtis must decide how much he’s willing to risk. He knows he can’t afford to get attached to Logan’s good cooking, his easy smiles, or his caretaking, but he keeps going back for more, even as deeper emotions become involved. Soon, Curtis must decide whether to risk his heart again or risk losing Logan for good.

Tender with a Twist is the second book in the Rainbow Cove series by Annabeth Albert. As most of you know, I totally loved the first book, Trust with a Chaser and I was super excited to read Curtis and Logan’s story. I’m thrilled to say that I loved this book almost as much as I enjoyed the first one and I absolutely can’t wait to see what Ms. Albert has in store for us next!

We met Logan and Curtis in Trust with a Chaser. Both men play pretty strong secondary characters (especially Logan) so I admit I was already invested into these two heroes lives before I started reading this book. One of the great things about this story is the way Ms. Albert seems to get to the heart and soul of her characters. Not only do they live and breathe off of the written page and despite their many flaws, they are easy to love. I personally enjoyed watching both of these two men truly work at changing their lives and making the hard choices and adaptions it takes to have a life together.

I admit that there were times I wondered if widowed Curtis would ever allow himself to be happy again. His grief is so great, that my heart broke for him. He pushes others away with his gruff exterior, but deep inside, Curtis truly longs to live again. Curtis’ journey isn’t always easy…for him or for us to read because there is so much fear and guilt he must work through before he allows his heart to trust and love again.

Logan also goes through a lot of changes in this story. For years he is has pushed his true desires aside and has done many things to please others instead of being his true self. I enjoyed watching Logan blossom into the man he strives to be, both to himself and to Curtis.

I also appreciated how the age difference between the two heroes wasn’t swept under the rug. I thought Ms. Albert did a great job at tackling this issue realistically and I understood the fears that Curtis particularly has because he is much older than Logan.

In the end, Logan and Curtis won over my heart and I loved the story they had to tell. The Rainbow Cove series has become one of my favorites and I cannot wait until the next book is released!

Although Tender with a Twist could be read as a stand-alone in this series, I recommend that you read these books in series order. All of the characters in this series play an important role within these heroes’ lives. Believe me when I say that these characters will live long in your heart long after you finish the book.

Click HERE to purchase Tender with a Twist by Annabeth Albert