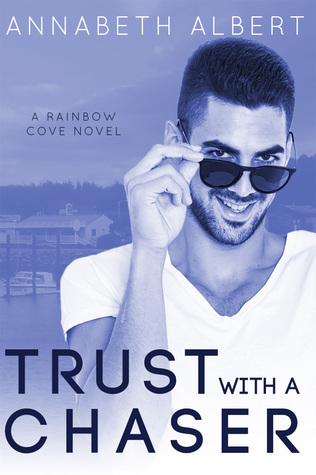 Mason Hanks has returned to Rainbow Cove, Oregon with one goal in mind: turn the struggling coastal community into a thriving LGBTQ tourism destination. Step one is transforming an old bar and grill into a gay-friendly eatery. Step two? Don’t piss off Nash Flint, the very hot, very stern chief of police who’s not so sure he’s on board with Mason’s big plans.

Nash Flint just wants to keep his community safe and enjoy the occasional burger in peace. He’s not big on change nor is he a fan of Mason’s troublemaking family, especially his rowdy older brothers. But Mason slowly wins him over with fantastic cooking and the sort of friendship Nash has been starving for.

When their unlikely friendship takes a turn for the sexy, both men try to steer clear of trouble. Nash believes he’s too set in his ways for Mason, and Mason worries that his family’s reputation will ruin any future with Nash. Burning up the sheets in secret is a surefire way to crash and burn, and discovery forces a heart-wrenching decision—is love worth the risk of losing everything?

As soon as I read the blurb to Trust with a Chaser, I knew I had to read it. Not only has, Annabeth Albert, quickly become a must-read author for me, I was excited to see that Trust with a Chaser is the first book in a new series.

Many of you know that I am a sucker for a May/December romance. Throw in a surly chief of police officer and a thoughtful man who is determined to make something of himself and I’m all in! The problem is…I made the mistake of starting this story right before my bedtime. Honestly, I should have known better, but since I was anxious to at least start the book, I didn’t think there would be any harm in reading a chapter or two before falling asleep. WRONG. I ended up becoming so wrapped up in Nash and Mason’s lives that I read through the night and finished the book without any sleep. Believe me when I say it was worth it! I loved every minute I spent reading this story and I can’t wait until the next book in the series!

Mason and Nash are complex characters. Nash is a forty year old man who still lives his life firmly in the closet. For all of his life, Nash has lived his life to not only serve the community he loves, Nash has strove to live up to his dead father’s expectations. Since his father was something of a homophobe and a cold fish, Nash has pushed aside his own wants and happiness to please a man who couldn’t ever be possibly pleased.

Mason Hanks has just returned to town and he is determined to not live up to his family’s bad reputation. To the townspeople and to Nash, the “Hanks” name has become synonymous with trouble, and Mason’s conviction to be nothing like his family is a noble one. Mason’s steadfastness to become a successful businessman and to make Rainbow Cove a safe haven for LGBTQ tourist makes him an easy character to like. Between his dedication to get Nash to like and respect him and his zest for life, Mason is truly a force to be reckoned with.

At first glance, one wouldn’t think these two men should be together, but between the sizzling chemistry they shared between them, and Mason’s determination to be seen as someone important in Nash’s eyes, I admit I hopelessly fell for this couple. I liked the way they brought out the best in each other and I loved the way both of them continued to grow and evolve as people and as a couple throughout the book.

Mason and Nash truly fit together. I loved them and I hated to see the book come to an end. I will say that both of their family’s attitudes drove me crazy. There were times I wanted to punch Mason’s family in the throat because of their laziness and constant mooching off of Mason. Nash’s mother can be a real cold fish, too. BUT saying this, the hate I had for them made this story and Mason and Nash’s journey an even better read.

Trust with a Chaser is one of my favorite books I’ve read this year. It’s a great start to what looks to be an amazing series and I can’t wait to read the next book! Do yourself a favor and read it and check out other books written by this author. You won’t regret it.