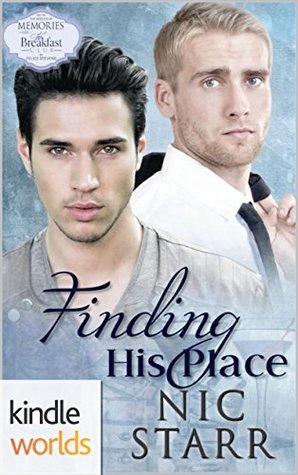 Sometimes finding your place in the world can lead to love.

Kieran Walters is the illegitimate son of a successful businessman. Despite striving to win his father’s affection, a confrontation that has been years in the making leaves Kieran devastated to realize he will never be good enough. Jealous of the half brother he’s never met, and who most likely doesn’t know of his existence, Kieran vows to find out what makes his brother so special in their father’s eyes.

Darius Jensen manages a nightclub. He loves his job, but is reluctant to commit when given the opportunity to become a partner. His previous foray into business ownership with a boyfriend had disastrous results, and Darius is still paying the price, both financially and emotionally.

When Kieran starts working with Darius at Sparks, Darius shows him it’s not too late for Kieran to realize his dreams—the fulfilling career, a loving family, and someone who loves him for who he is. If only Kieran can convince Darius of the same thing. But before Kieran’s and Darius’s dreams can come true, Kieran needs to come clean with his brother and deal with the resulting fallout… which threatens his relationship with Darius.

I’ve read several books by Nic Starr and I’ve come to expect a few things from her stories. First, Nic writes compelling heroes that live and breathe off of the written page. It’s easy to get wrapped up into the lives of her characters and enjoy the story they have to tell.

Second, Nic writes a very heated, strong physical attraction between her men. By the ‘look’ Darius and Kieran gave one another and the flirtatious banter and heated glances they shared, it practically steamed up my computer screen! Who knew that something as innocent as Darius interviewing Kieran for a job would be sexy? The sizzling chemistry these two men shared was HOT!

Third, there is always a strong emotional bond between her heroes. I am first to admit that I’m a sucker for two men who genuinely like, respect and love one another. It was so easy to see how much Darius and Kieran were a perfect fit. I liked the way they were not only lovers…they were friends. It was obvious that there was something special between them.

Last, Nic’s stories are always fast-paced and well-written. From the first page, Kieran in particular, stole my heart. I couldn’t help but root for him and was thrilled that he was able to work through family and self-doubting issues and become a stronger man who knew he was worthy of love. Kieran does a lot of self-growth throughout the story and I enjoyed watching him evolve into a more confident man.

Darius was perfect for Kieran. Like Kieran, Darius has his own moments of self-growth. He learns to trust again and allows himself to take a chance on developing something special with Kieran.

All in all, Finding His Place is a gem of a story that is not to be missed! I loved these characters and highly enjoyed the story they had to tell. Finding His Place is a book in the Memories with the Breakfast Club series. I haven’t read the other books in the series, but if they are as good as this book was, it is definitely a series I’ll have to check into soon.

Click HERE to purchase Finding His Place by Nic Starr