Welcome to Top2Bottom reviews! We are thrilled you and Lou are here to talk about your newest release, Sunset at Pencarrow and share a little bit of your lives with us today. We’d love to know how your writing team came together and what it’s like to co-author a book.

Thanks for hosting us. Lou Sylvre and I are delighted to be here today as part of our blog tour for Sunset at Pencarrow.

We have a Rafflecopter running as part of the blog tour so be sure to enter—which you can more than once. Use the discount code PENCARROW for 30% off Sunset at Pencarrow only from the Dreamspinner Press store from 31st May-30th June.

When Lou asked me if I’d like to co-write the New Zealand entry for Dreamspinner Press’ World of Love series, I jumped at the opportunity. I’d eyed up the range, but didn’t think I’d have the time, so co-authoring solved that issue brilliantly. Lou and I were already working together on another project so I knew she’d be great to work with, which was another plus. One of the big issues with co-authoring is that you and your partner-in-crime both need to be willing to talk through everything, and often compromise, to reach solutions you’re both happy with.

We chatted back and forth—via google chat and email—until we had a synopsis we could use to pitch our idea to the publisher. Once the publisher said yes, and we had a six month deadline in place, it was all go.

We decided—as it was working so well with our other WIP—to take a POV each, and write a detailed scene by scene outline, and then work out which scene would work better from which perspective. I wrote the scenes from Nate’s POV, and Lou wrote the scenes from Rusty’s POV. We then sent the document back and forth until we had a first draft.

It’s a different experience writing someone else’s character and I was initially concerned about doing Rusty justice, although that was soon dispelled by Lou who insisted I was, and vice versa. Rusty was dictating the story to me as much as Nate was! We both wrote with the understanding that the other might tweak our character’s dialogue, although that wasn’t so much a co-authoring thing but the fact that—like our characters—I’m a Kiwi, and Lou’s American, so we might not have each other’s character’s slang quite right. Another thing I hadn’t expected was second guessing Kiwi slang. Lou would ask about something, and I’d suddenly think “hang on, is that the way we say it here?” and having to double check. I grew up in a household with a Kiwi father and an Australian mother so suspect some of my expressions are a mix of both.

Co-authoring is great for bouncing ideas back and forth, and knowing someone else is waiting for your scene so they can write theirs means the story writes a lot faster. I loved having a scene hit my inbox and inspiring my own writing as to what came next. Although we had a very detailed outline—more than what I usually have—the characters still did their own thing and we changed direction in a few places. It’s another reason why it’s important to work with someone who is happy to go with the character flow and do that.

Sunset at Pencarrow is our first published co-authored story, but we’re hoping it won’t be the last. We’re heading back to Scotland in the 1745 after this for more adventures in co-authoring land. I’m looking forward to it. 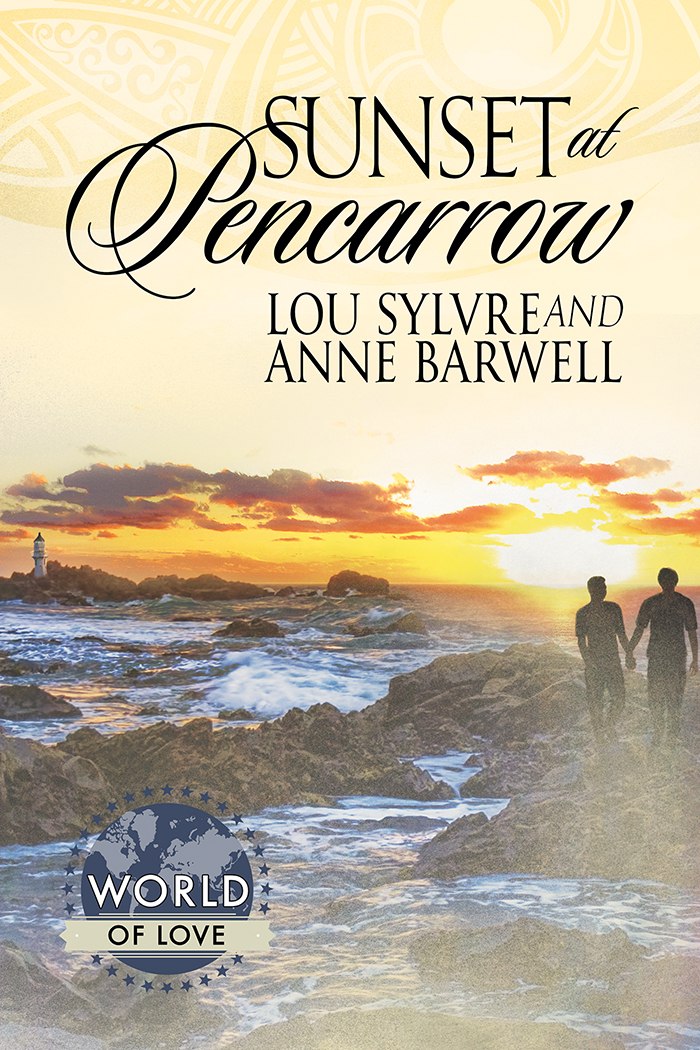 Kiwi Nathaniel Dunn is in a fighting mood, but how does a man fight Wellington’s famous fog? In the last year, Nate’s lost his longtime lover to boredom and his ten-year job to the economy. Now he’s found a golden opportunity for employment where he can even use his artistic talent, but to get the job, he has to get to Christchurch today. Heavy fog means no flight, and the ticket agent is ignoring him to fawn over a beautiful but annoying, overly polite American man.

Rusty Beaumont can deal with a canceled flight, but the pushy Kiwi at the ticket counter is making it difficult for him to stay cool. The guy rubs him all the wrong ways despite his sexy working-man look, which Rusty notices even though he’s not looking for a man to replace the fiancé who died two years ago. Yet when they’re forced to share a table at the crowded airport café, Nate reveals the kind heart behind his grumpy façade. An earthquake, sex in the bush, and visits from Nate’s belligerent ex turn a day of sightseeing into a slippery slope that just might land them in love.

World of Love: Stories of romance that span every corner of the globe.

“I don’t bloody believe this.” Nathaniel “Nate” Dunn took a deep breath. “So, any idea when my flight might actually leave?”

The woman at the counter gave him what she probably thought was a pleasant smile. Instead it came across as condescending with a touch of oh help me, God, how stupid is this guy?

“I’ve already told you—” She glanced at his ticket. “—Mr. Dunn… Nathaniel… I don’t have that information. The fog will lift when it decides to lift, and we can’t begin to reschedule flights until that time. In the meantime, you’ll have to wait like everyone else.”

“You don’t understand. I have to be in Christchurch this afternoon. I have a job interview tomorrow.”

“Of course you do.” The woman seemed ready to dismiss him but then appeared to reconsider. “If you’re desperate, perhaps you can catch the afternoon ferry sailing to Picton and then a flight from either Blenheim or Nelson.”

“The ferries are full.” Nate read the name on her badge—Heather Rawlins. “Ms. Rawlins, I’ve already thought of that.” He waved his hand to indicate the very full airport. Many of those in line behind him were students. Several of them looked very young, and they had parents hovering around them. Probably their first time away from home, and not a great start to a course of study at either Canterbury or Otago universities. “Uni starts back last week of February. That’s next week. There’s only me and several hundred others trying to make it to the South Island.”

“You’d better settle in and wait, then, hadn’t you? This might take a while.” Heather looked past him. “Next, please.”

“Charming,” Nate muttered. Why the hell had the fog decided to pick today of all days to turn up? Beautiful weather for weeks, and on the only day he needed to fly out of Wellington, the bloody stuff foiled his plans. His flatmate, Amy, had warned him to be prepared for delays when they hadn’t been able to see the airport from across the harbor that morning, but he hadn’t listened. Fog in the morning didn’t mean the stupid stuff would hang around all day. Typical of his luck lately. “Windy Wellington” and today there wasn’t even a breeze to blow the fog out.

It was a conspiracy.

Much like the rest of his life. One could only take so much of pretending everything was hunky-dory and plastering on a false smile. He was sick of it. Bad enough that Glenn—who he’d thought was the “one,” the guy he’d be with forever—had dumped him, but to find out his job of the last ten years was finishing as well? And now this….

“Excuse me, sir,” a man behind him said in an American accent. “There’s a line here, and I’m sure the lady has done all she could to help you.”

Author bios:
Anne bio:
Anne Barwell lives in Wellington, New Zealand. She works in a library, is an avid reader and watcher across genres, and is constantly on the lookout for more hours in her day. Music often plays a part in her stories, and although she denies being a romantic at heart, the men in her books definitely are. Anne has written in several genres—contemporary, fantasy, historical, and SF— and believes in making her characters work for their happy endings.

Lou bio:
Lou Sylvre loves romance with all its ups and downs, and likes to conjure it into books. The romantics on her pages are men who fall hard for each other, end up deeply in love, and often save each other from unspeakable danger. It’s all pretty crazy and very sexy. Among other things, Lou is the creator of the popular Vasquez and James series, which can be found at Dreamspinner Press, Amazon, and many other online vendors.

We hope you’ll join us for the other stops on the tour. Click here to see the complete schedule and links to the blogs.