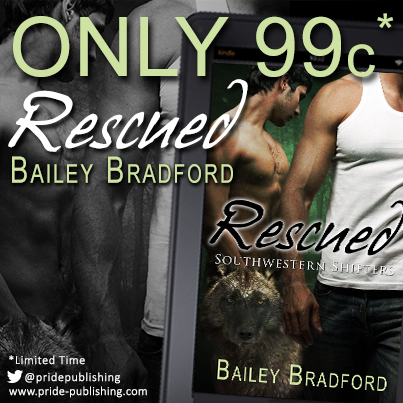 Here is more about Rescued by Bailey Bradford:

When Gabriel Staley rescues a magnificent black wolf, he has no idea that destiny has just turned up the heat and brought him his mate, sexy shapeshifter Mika Blackwell.

Gabriel Staley was used to being an outcast in the small town of Shasta, Texas. More concerned with rescuing stray dogs from a cruel death at the hands of the local Sheriff, Gabe focuses on making a difference and standing up for what he believes is right. Mika Blackwell, a shape shifter who was banned from his pack, is new to the outcast status, and not adjusting very well.

When Gabe heads out to rescue an injured wolf, he has no idea that his life is about to be eternally altered. As Mika watches the man approach him, he feels the universe tilt and realises that, while he may have lost his pack, he’s just found what every shifter longs for—his destined mate.

Together, Gabriel and Mika must find their way and fight for their love—from confronting Mika’s former pack leader to stopping someone who tries to kill Gabe’s best friend, Todd. When Todd’s attacker comes after Gabe, Mika is determined to protect his mate at all costs.