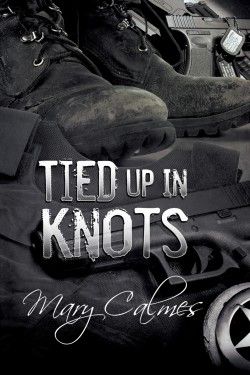 Miro Jones is living the life: he’s got his exciting, fulfilling job as a US deputy marshal, his gorgeous Greystone in suburban Chicago, his beloved adopted family, and most importantly, the man who captured his heart, Ian Doyle. Problem is, Ian isn’t just his partner at work—Ian’s a soldier through and through. That commitment takes him away from Miro, unexpectedly and often, and it’s casting a shadow over what could be everything Miro could ever dream of.

Work isn’t the same without Ian. Home isn’t the same, either, and Miro’s having to face his fears alone… how to keep it together at the office, how to survive looming threats from the past, and worst of all, how to keep living without Ian’s rock-solid presence at his side. His life is tied up in knots, but what if unknotting them requires something more permanent? What would that mean for him and Ian? Miro’s stuck between two bad choices, and sometimes the only way to get out of the knot is to hold tight to your lifeline and pull.

Tied Up In Knots is the third book in the Marshals series by author Mary Calmes. Let me say right up front that I am a huge fan of Ms. Calmes and this series is one of my all-time favorites. For those who have not yet read the books in this series you should know two things, one – this is a series that needs to be read in order. The second is that this review will unfortunately have spoilers with regards to the other books.

While Miro and Ian became engaged in the second book, Fit To Be Tied, they haven’t gotten any further than that, leaving Miro wondering about the future of their relationship. Then there is the fact that Ian keeps getting pulled out for military duty, leaving Miro alone. Although these things are worrisome, they do not come close to pulling these two apart. There is also the issue of both men are so afraid of losing what they have, that they stop talking to each other, causing more than a few problems. Of course there are outside forces at play too. First there is a problem with Ian’s former unit. Men are dying and it’s not on a field of battle. Then someone from Miro’s past shows up and sets everything, and everyone, spinning.
I don’t want to give too much of what goes on in Tied Up In Knots away, so let me just say that the connection between Miro and Ian is as strong as ever, and I love the passion that exists between them. I also like the way the author has them still learning things about each other, even after being together, in one fashion or the other, for so long. No matter what pops up, or how often I worried about them, especially as the author has broken up main characters in her other books, it is easy to see that these two are meant for each other.

The various cases keep the men hoping. Some are little problems that are easily solved and others lead to close calls. I like that the author can make this part of the story come alive as easily as she can the romance part. I also like that several secondary characters return. Watch for papa Miro to get a new ‘child’, one who just happens to click with the first two. They have trouble written all over them and I kind of feel bad for Miro and Ian. Some story lines are permanently wrapped up and I hope this does not mean that the series is ending, especially as Kage is looking for two new members to join the unit.

Fans of the series are really going to love this latest addition, and those who have not yet given this series a try really need to pick it up today.