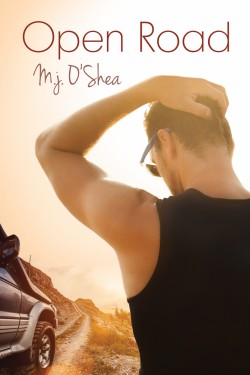 Angus has been with the same guy for ten years. When his boyfriend breaks up with him the night of his thirtieth birthday party and announces his engagement to a twenty-two-year-old less than ten hours later, Angus is… a mess. To put it lightly. He spends days in bed, drinks himself into a stupor every night, and ends up losing his job and his apartment. His best and oldest friend, Reece, decides it’s time for an intervention. And a change of scenery.
Reece and Angus take off on a buddy trip across the US. They don’t have much of a plan; they just start driving. It takes Angus a couple of days to do much more than grunt when Reece talks to him, but slowly he opens up. They drive, talk, heal, shout, drink a bit too much sometimes, dance, meet new friends… and somewhere between Portland, Oregon, and Portland, Maine, they fall in love.

Which was the last thing in the world Angus expected.

Open Road by author MJ O’Shea is a bit on the angst driven side but readers will find themselves drawn in from the beginning. It is the story of two friends and how one loses his way and is brought back to life with the love and help of the other.

Angus is already having a hard time with turning thirty but believes the love of his longtime boyfriend will see him over life’s little bump. What he does not expect is to be dumped and replaced so quickly by someone much younger. I could not believe the actions of Angus’ boyfriend, Brad. To dump Angus in the manner he did was uncalled for and not to sound ugly but I wanted to smash his face. Angus takes what happened hard, as can be expected. What I did not see coming is just how hard he does take it.

Reece is Angus’ friend. He has been in love with Angus for as long as he can remember but because of Brad, is willing to step aside. When Angus is dumped Reece is there to help pick up the pieces. Reece is just as shocked as the readers will be when he sees how far Angus has fallen. Reece feels a guilty for not stepping in to help his friend sooner and comes up with a plan to help bring the old Angus back. Of course this is a MJ O’Shea story so fans know that the chemistry between these two will be intense. I loved seeing their relationship change and was happy to see them find their HEA.

I love when the characters in a book hit the road, especially when they go to places I know. I also love that Reece sees this as a way of helping his friend and plans to drive until Angus is ready to return home. The fact that they just drove, going in whatever direction they wanted with no clear plan in mind made me a little jealous.

I think fans of Ms. O’Shea will really enjoy Open Road. It is a story that has found its way to my keeper shelve and one I will be reading again.