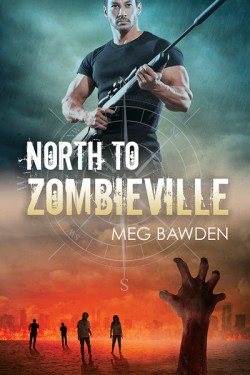 The year is 2028, and Dallas and Raleigh Jenson are torn apart when a worldwide zombie apocalypse ravages their home of Townsville, Australia. After a year of searching, Dallas, a former Australian army rifleman, finally reunites with Raleigh, but it’s not like old times. Not only do they have zombies to contend with, but also other humans, changed by desperation and willing to do anything to survive.

Dallas and Raleigh have changed too. So much so, that Dallas struggles with the idea that Raleigh no longer needs or wants his protection. But they will need to rely on each other and find strength in their love as they are forced to evade zombies and watch their friends die. As they fight for their lives in a brutal landscape where every supply and every step toward a potential cure is a battle to the death, only their trust in each other can keep them from perishing.

Meg Bawden is a new author to me and after reading North to Zombieville she is one that I will be reading more of. Fans of the zombie sub-genre are sure to love this new series and I love how it is a little different from what we have seen before.

North to Zombieville takes place in the future and other than the time period nothing seems any different from today’s world. The main characters, Dallas and Raleigh have been together for a while and are celebrating their anniversary. I love that neither man worries about making excuses for loving who they do. I also thought the way they met was over the top and could not decide who I was more embarrassed for, Dallas or Raleigh, when Dallas’ friend showed up to say hi.

Dallas is former military so when something goes down at the restaurant where they are celebrating, he goes to see how he can help. What ensues next is something that neither man can understand and during the upheaval Dallas and Raleigh are separating. The author continues to follow Dallas so the readers see how much he fears losing his husband. I wanted to cry alongside the tough military man as he sat next to his husband’s china.

North to Zombieville picks up a year later and while Dallas has been searching for Raleigh, he has gathered a group of strays who are also trying to stay alive. He has no problem with them staying with him, or looking at him as their leader, as long as they realize that his first thought will always be Raleigh. While the reader knows that Dallas will eventually find Raleigh, due to the publisher’s blurb, you can’t help wondering how that will be possible with the way things are now.

When Dallas finally finds Raleigh, both men are shocked and overcome with joy but tragedy soon follows that has Raleigh totally shook up. I have to say that for me that was an OMG moment as well as an Oh Crap one. As you would imagine there is an adjustment period for these long time lovers as Raleigh has learned, to some extent, how to stand on his own, which means Dallas can’t help wondering what his role in Raleigh’s live will be now.

The romance between Dallas and Raleigh is an important part of the book; however, the author does an outstanding job bringing the Science Fiction part of the story alive for the readers as well. There is very little lag time in this book and readers will be flipping the pages to see what will happen next. While one question may be answered, due to Raleigh, there are still many unanswered questions and I can’t wait for the next book to come out. Fans of the sci-fi genre, especially that dealing with zombies, really should give this story a shot.