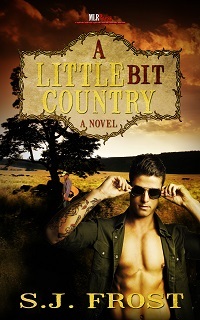 Rock singer, Ash Ivers, and country music star, Jackson Abrams, have intense passion that brings them together, but will they be able to overcome all their differences when Jackson’s career is threatened?

Ash Ivers says and does what he wants, and with being the lead singer of the world famous rock band, From Ashes, he gets away with both. Three years ago, his mouth got the better of him, and he started a media feud with county music star, Jackson Abrams. When they’re both booked to play a charity concert, he sees his chance to finally confront Jackson in person. Though, he’s uncertain if his anger will hold against his attraction to the singing cowboy. Jackson Abrams is the darling of country music. He’s polite, charming, handsome…and he has a secret that he fears could jeopardize his career. When it comes to the cocky rock star, Ash Ivers, he’s infuriated and intrigued by him. He wants their feuding to stop, but he also doesn’t want to lose the attention it gives him from Ash. As Ash and Jackson meet, the heat of anger turns to passion. But when Jackson’s world starts crumbling around him, will their differences make them stronger, or drive them apart?

A Little Bit Country is a sweet and sexy romance by SJ Frost. Ms. Frost knows how to write romantic relationships that develop between two seemingly opposite personalities and somehow make them fit.

I read this book because the author mentioned it on her Facebook page. This book had somehow escaped my notice and since I enjoy reading Ms. Frost’s works, I knew I had to purchase it and review it.

When we first meet Ash and Jackson they are in the middle of a feud. Ash is the epitome of a bad boy rockstar, whereas Jackson is the darling of country music. For months they’ve been trading barbs back and forth to one another through the press, so when Jackson decides to put their feud to rest, both men find themselves surprisingly wrapped up into an attraction that neither man is prepared for.

I liked how Ash and Jackson began to relate to one another. Though they look to be polar opposites, they begin to bridge a commonness and friendship between them that I really enjoyed watching develop. Plus, the heated physical attraction these men had for one another had an intensity that I loved.

As they begin their budding relationship rumors of Jackson’s sexuality begin to surface. Because he is popular in an industry where homosexuality isn’t always embraced, both Jackson and Ash have some hard decisions to make if they want a future together. I really enjoyed watching them work things out and loved how they joined together as a team.

If you are looking for a sexy romance without a lot of angst and with a guaranteed happy ending, A Little Bit Country by SJ Frost is definitely the book for you!