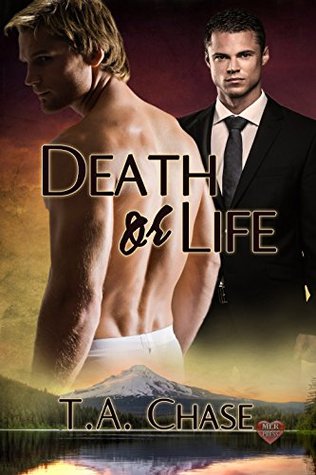 Imagine Noah Wiltson’s surprise when a hired killer gives him the means to live his life without doubt or fear.

Noah Wiltson wants nothing more than to be left alone. His father’s candidacy for President forces him to have secrets. Imagine his surprise when a hired killer gives him the means to live his life without doubt or fear.

The killer knows this hit is going to be his last. Whether he chooses to walk away or whether they kill him. He’s never been a team player, so he ends the game on his terms.

A few months later, Noah meets Cain Packert, a man who intrigues and excites him. Only one of them knows the truth. Can they find love amid secrets and threats?

Death or Life by TA Chase is a nail biting, suspenseful novel that kept this reader on the edge of her seat. Wow! Just when I thought things were going to go a certain way, Ms. Chase threw in a curve ball or three and before I knew it everything I thought was going to happen didn’t!

Death or Life starts off with a bang and ends with one.

When we meet Noah, he’s being confronted by a man sent to assassinate him. To his surprise, and to my own, the contract killer gives him a few words of warning and lets him go. What follows next is a series of twists and turns that will satisfy any reader who loves a lot of mystery with their romance.

Noah is a very likeable man. Basically, he’s a genuinely nice guy caught up into a deadly deceit and lies of someone who should have been looking out for him, instead of wanting to kill him. Luckily, Noah does have a small circle of people he can trust and rely on. This is good, because Noah has a good heart and often looks out for others, even when his own life is in danger.

When he meets Cain, Noah is immediately drawn to the mysterious man. I liked the sizzling chemistry between them and the ongoing saga of who Cain really was *I truly thought he was someone else for a while…boy was I wrong* and the secret of his past that continues to haunt him. Cain is one of those men who does what he feels is right, even if it isn’t always the noblest of choices to make. I liked Cain and found him to be a strong character and very well matched for Noah.

The characters that really did steal the book for me were the two main secondary characters. I can’t say their names, or I’ll spoil it, but I totally fell in love with them and was bewitched by their relationship. I couldn’t help but hope there was going to be more about them than there were. In some ways I thought this couple stole the spotlight from Cain and Noah. Though I really liked the main heroes, in the end it was the secondary couple who truly stole my heart.

Death or Life by TA Chase is a novel not to be missed. I truly hope Ms. Chase will one day write more about the secondary heroes. Along with Cain and Noah, I adored them and would love to read more about them in the future.

Click HERE to purchase Death or Life by TA Chase