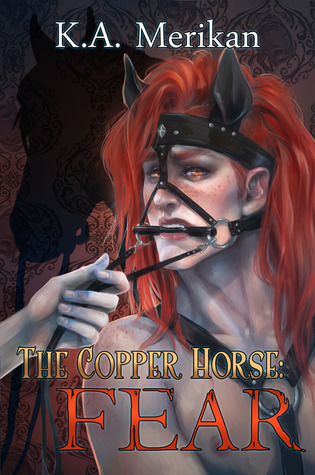 Discontented with his state of existence and with his own secret and self-destructive attraction to men, Reuben, the son of a baker, is convinced to engage in an act of rebellion against his father. But when his compatriot betrays him, Reuben awakens to shackles, a filthy dungeon, and the knowledge that he is going to be forced to battle captive zombies for the entertainment of the Bylondon underworld.

When he’s claimed, instead, by a powerful and stunning member of Bylondon’s ruling family, Reuben is willing to serve in whatever way ensures that he’ll see another day, even if that means training to become the perfect human horse. Erik is a kind master, and one that Reuben thinks he could grow to love… but the power of his shame and his self-hate rise up inside him, threatening to tear him away from the love—and the lifestyle—that he could never have brought himself to openly desire.

Anyone who has read any of my reviews is probably aware that I’m a big fan of KA Merikan. These two ladies never fail to entertain this reader and I always end up wanting more every time I finish one of their stories.

I will be the first to say that this book is NOT for everyone. I think it’s fair to state that it will make some readers uncomfortable because of the dynamics between the two heroes. There will be some readers who will not like the way Erik dominates over Reuben, and I totally understand it. The authors are known to push boundaries in their books, and because of it, their books aren’t for everyone. BUT having said this, I love how their stories are able to make me feel uncomfortable one moment and totally root for the heroes the next. In my opinion, this makes them authors who write stories that I will always remember, look for their next release as well as reread some of my favorites.

Copper Horse: Fear is one of my favorites by this writing team.

This story definitely has a steampunk setting, also if you have read any of their zombie themed books in the past, this is tentatively set in the same creative world. When we meet Reuben he is going through the motions of his life. He is a baker, who hates what he does. He lives in poverty with his father and his only escapism is through a bottle of gin. One night he is kidnapped and forced into slavery. His kidnappers have hand picked him to fight for his life against the undead in a sick-twisted game that the upper-class residence enjoy. Lucky for him, he is saved by a handsome, but perverse man, (Reuben’s words) and forced into a life of horseplay in which Reuben is both appalled and fascinated with.

This story is the journey that Reuben (Copper) goes through as he learns to let go of his fear and shame and become a more focused and even proud individual. We learn about Erik as Reuben does, and as the pieces of the puzzle are slowly put together, Erik’s mysterious life fascinated me as much as it did Reuben.

I loved every minute I spent reading this book. Yes, there were times I wanted to pull Reuben into my arms and save him from the ‘lessons’ he was made to do. But even then I could see that although Reuben fights Erik as well as his submission to him, he also quickly became more settled with himself and even (to his own dismay) comfortable at becoming Erik’s pet.

I need to point out that Reuben’s submission is not an easy one. If dubious consensual sex bothers you…this story is not for you. Reuben knows he must submit or he could possible lose his life. Erik is not always seen in a positive light. He does things to get Reuben to submit to him that will make a reader that might not be prepared to read such a strongly told tale.

Lucky for me, I sometimes like to step out of my comfort zone; especially with authors that I’ve learned to trust in the journey they tell and to me, the two ladies who write under the name of KA Merikan deliver satisfyingly creative stories every time. In the end, I wanted these two heroes to find a way to communicate and I wanted Reuben to trust his own instincts as well as Erik’s as well.

I can’t wait until the next book in the series. There is still much to learn about these two men and I’m anxiously waiting to see what happens next.