We’re thrilled to host Scarlet Blackwell today, who is here for the Storm Moon Press 4th Anniversary blog tour! Be sure to read to the bottom of the post for the Rafflecopter giveaways. You have a chance to win a copy of “Playing With the Big Boys” OR free e-books for a year from Storm Moon Press! Awesome! Without futher ado, here’s Scarlet!

As Storm Moon Press celebrates diversity in their fiction for their 4th Anniversary and beyond, the UK appears on the verge of granting full marriage rights to LGBT couples. The UK has had a civil partnership bill since 2004 but has somewhat lagged behind other countries by failing to pass a same-sex marriage bill through parliament. That changed this year when the Marriage (Same Sex Couples) Act 2013 received a Royal Assent and is likely to be passed in England and Wales in mid-2014. The UK will be added to a list of other countries flying the flag for equality like Australia and France, and one can only hope that the number of states in the US allowing gay marriage will soon be expanded.

It is a good time to be a UK-based writer of m/m fiction and the new legislation opens further creative doors.

In Playing with the Big Boys, my contribution to the Weight of a Gun II anthology, I write about two cops stumbling upon a couple of thieves in a warehouse. Caleb’s partner (read: fellow-cop) soon disappears, and he is left at the mercy of Leon and Riley, the two thieves, who restrain Caleb and proceed to show him the time of his life. The story pushes boundaries. It rides an edge of non-consensual sex close to the wind and illustrates just how fearless and uncompromising Storm Moon Press is when it comes to taking on work that other publishers may baulk from.

While some publishers have a list of do and don’ts and are afraid to take a chance on controversial work, Storm Moon Press doesn’t have this problem. They let the author have free rein over their creativity and don’t try to stifle it. This is why Storm Moon Press celebrates diversity in life and in QUILTBAG fiction with every book they publish and why authors see the publishing house as a breath of fresh air in the often restrictive market of m/m romance.

To finish this brief piece, I’d like to offer a sample of Playing with the Big Boys, which now has its own short story release at Storm Moon Press. Thanks for having me, and I hope you enjoy my work and that of other authors who are given the opportunity to embrace their creativity at Storm Moon Press! 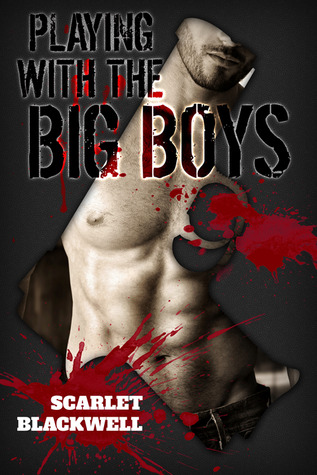 Caleb came back to consciousness slowly with his head ringing. He opened his eyes groggily with his vision spinning and pulled hard when he felt steel shackling his wrists. What the hell? He closed his eyes again until the room stopped moving and took a deep breath before he examined his surroundings. He was sitting on a big chair with long arms, his wrists pulled behind his back, legs splayed and ankles tethered to each leg of the sturdy wooden chair. To add insult to injury, he was gagged by a scrap of material that smelled of masculine cologne. The only thing he had left was his eyes. He squinted at the scene in front of him, shivering in the cold air. Where was Dennis? Caleb hoped he was about to burst in at any moment with back-up.

Two men, one blond and one dark, stood in front of him regarding him in amusement as he strained at his bonds. They both wore jeans and T-shirts. They were both built like brick shithouses. The blond had a gun shoved into the waist of his jeans.

The brunet, attractive with startling green eyes, was holding something familiar: Caleb’s gun.

Caleb spat a curse behind his gag. The blond guy folded his massive arms and laughed. Caleb’s gaze drifted to the small table between the two men. On it, beside a tube of lube, a pack of condoms, and some sex toys, lay his own utility belt with each item neatly extracted – the radio, nightstick, and Taser. Of course, the cuffs were missing because they were around his own wrists. Caleb looked around, eyes rolling in wild despair.

“So,” the brunet drew his attention, examining Caleb’s piece. “Smith and Wesson 4006 TSW tactical semi-automatic handgun. Heavy. Bitch of a recoil. Needs twelve pounds of pressure on the double action first shot, four and a half pounds on the subsequent shots.” His gaze dropped indecently down Caleb’s muscular frame. “You don’t seem like you’d have much trouble with that.”

Caleb glared at him by way of reply.

“Seven and a half inches long.” The man smirked. “Not bad.” He stepped forward. “Tired of you not contributing to the conversation, dude.” He yanked Caleb’s gag free.

“You’re not fucking me!” Caleb cried. Christ, he needed Dennis now. This was his worst nightmare.

“Wasn’t aware you had a choice,” the blond chipped in.

“Riley’s right,” the brunet said. “I’m Leon by the way. Let’s be on first name terms when we’re all going to be intimate together.”

Caleb jerked his head away as Leon stepped between his thighs, pressed the gun against his left cheek, caressing the curve of Caleb’s jaw almost lovingly, finger hovering over the trigger. “The things I’ve done with guns, Officer Baker, they’d make your hair curl. I knew this one guy who loved to be fucked by a .44 Magnum. Cocked, you understand. Thought he was Dirty Harry. I had to ask him if he was feeling lucky, punk, while I fucked him.” Leon grinned, teeth bright as Caleb rolled his eyes. “I know, right? There’re some crazy motherfuckers out there but hey, different strokes for different folks. All I know is cops make me so hard I can barely think.”

Caleb automatically dropped his gaze down Leon’s brawny body and saw the erection tenting his jeans. He gulped, and then lifted his eyes to those above him. Leon looked down at him with a smile on his face, that gun still learning his face. He pressed the pistol against Caleb’s jammed-shut lips.

Christ, was the safety on? Caleb was too scared to look. He opened his mouth and stainless steel clicked against his teeth as Leon inserted the handgun.

Caleb closed his mouth over the cold barrel. He did as he was told, eyes shut. He liked his gun – despite what Leon had said about its flaws. At least, he had liked it until it had been turned upon him.

Caleb put his tongue out and licked the tip of the barrel. He looked up and found his tormentor’s gaze fixed on his, Leon’s pupils hugely dilated. “This is going to be an absolute pleasure,” Leon murmured.

This post is part of Storm Moon Press’ 4th Anniversary Blog Tour! Thank you for joining us, and please take a moment to enter Scarlet Blackwell’s giveaway for “Playing With the Big Boys” as well as our blog-tour-wide giveaway! The prize is receiving an ebook each month from SMP for 12 months! We hope to see you around the Internet and at RainbowCon in 2014! Happy New Year!