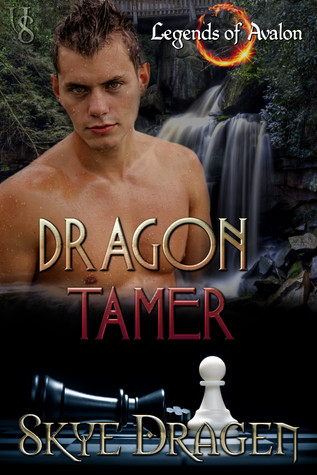 Challenged by a puny human to a round of three-way chess, the dragon of Blackwater Falls, Aden Canicus, desires nothing more than for the games to be done so he can enslave the arrogant human who dared to make his way up the mountain to disturb his solitude.

Tjaden Moore has crossed an ocean in order to meet the dragon who lives on his uncle’s magical game preserve. If he wins their game, he will have Aden for twenty-four hours in human form, and he doesn’t entertain any other possibility.

A win might gain the treasure hunter the night of debauchery he wants but being with someone as magical as a dragon could form bonds between them that he can’t begin to comprehend, let alone resist.

Aden Canicus is the very private and solitary dragon living in the magical reserve of Blackwater Falls. When Tjaden Moore travels up the mountain to challenge him to three simultaneous games of chess it begins a series of bargaining sessions. Those bargains lead in some of the hottest, kinkiest sex I’ve read outside of fanfiction and I loved it.

The blurb says that Tjaden sought out Aden in the hope of winning a night of debauchery, but I never really felt that was the original reason he was there. He said it was because a witch had sent him there as a way to break a ‘wanderlust’ curse. Deep down I think Tjaden was just plain curious and wanted to meet the dragon he’s heard so much about. It was Aden’s ability to think beyond the exact meaning of the words of each bargain and his use of magical objects that leads to Tjaden night of debauchery which is the core of the story.

In lots of ways I wanted to give this story more kisses but too many moments of thinking ‘what?’ ‘why?’ or ‘I wish you’d made more of that’ turned it from a fantastic book to a good book. Sometime I was confused by poor clarification of which character I was reading about or by trying to keep track of the details of each bargain other times I was frustrated, wanting the author to make more of Aden’s magical abilities .

Otherwise this is a short story that really tickled my fancy and didn’t fail to keep my interest. The fact that this story is listed as Book 1 of The Legends of Avalon series gives me hope that I may get my wish to read more of Aden and Tjaden sexual adventures.