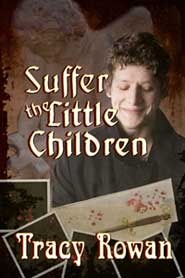 Blurb:
When Victorianprivate investigator Nick Romney’s step-father, an Anglican bishop, ismurdered, Nick refuses to get involved. At the urging of his family, though,Nick and his lover Davy step in to investigate. Together they uncover the truthof the bishop’s involvement in the dark and horrifying world of childprostitution, the reason why he was killed, and the shocking identity of themurderer.
Review:
Setting a book in Victorian Era London doesn’t necessarily guaranteethat I’m going to love it—but I’ll be completely honest, it certainly does tiltthe odds in the book’s favor. I’m a little bit consumed by that particular erain history. When I think of that period in time, I envision everything fromDickensian Christmases to Jack the Ripper taunting the police and terrorizingWhitechapel to Oscar Wilde serving hard labor for the sake of his desires.How’s that for a dichotomy?
But an engrossing setting is only a portion of what it takes to make astory a success. In order for a book to succeed entirely, it must also presenta strong, well written, sufficiently detailed plot, as well as characters whoare not only capable of relating their story but are capable of relating thatstory in a way that draws me into their world and their lives. In the case ofSuffer the Little Children, Davy Fitzhugh, our narrator, lends us his voice,and what a wonderful voice he has. And what a gripping story he has totell.
I find the waning years of the 19th century to be theperfect setting for a murder mystery, as those were the days when forensicscience was in its infancy, the telephone a novelty, and crime scenephotography just beginning to come into practice. The collection of forensicevidence, such as fingerprints, didn’t necessarily guarantee the courts consideredit to be reliable and admissible during trial, however. Many crimes, then, weresolved with little more than the ingenuity, persistence, and instincts of theinvestigators. It often took a keen mind, a talent for deductive reasoning, anda photographic memory, which are the precise tools employed by privateinvestigator Nick Romney, a man renowned for his superior sleuthing skills.
Rom and Fitz, as we come to know them, are a team. They are lovers, aswell as a crime solving couple. Rom deduces while Fitz details, chronicling theevents and evidence in their investigations. The reader is drawn entirely intoDavy’s confidences, forming a bond between himself and his audience that goeswell beyond the work he and Rom perform and delves into their personalrelationship. There are things in Rom’s past that have influenced the man hehas become, and we learn right along with Fitz what those secrets are. It is animportant connection between the narrator and reader that personalizes thestory even further.
Rom is estranged from his family, and for good reason. He’d left homeas a teen and hadn’t seen, spoken to, or heard from them in the fifteen yearsthat followed their complete and utter betrayal. That is until he received atelegraph asking him to come home to investigate the murder of his stepfather,Hugo Oliver. The dysfunction of the Romney family is entirely contradictory tothe unconditional love and support Davy and Nick receive from Davy’s parents,Sir Charles Malvern and Lady Sarah. In a time when homosexuality was a crime,Sir Charles and Lady Sarah encourage and respect the love their son and Romshare. As wonderful as Nick and Davy are, Davy’s parents are all that and thensome, lending strength to the supporting cast of characters
Suffer the Little Children is a diarist’s recounting of a horrificcrime of abuse, of the spoiling of innocence, placed in a time capsule andsealed for the interest of future generations. It is a crime of the past thatstill holds weight in the present. It is a story of justice and injustice, ofjustifiable homicide, revenge, and a betrayal of trust. The victim in thisbook, in truth, is not the murdered Bishop. The victims in the story are thechildren whose innocence he betrayed. The true crime in Suffer the Little Childrenis that the condemned man died before he was made to suffer for his corruption,and that the echo of the crime continued to resonate in the shrouding of, bythe religious conclave that seeks to keep its dirty secrets buried, theexploitation of the innocent.
Tracy Rowan has crafted a first rate story, led by a superb pair ofprotagonists, and sustained by a top notch assembly of minor characters. Sufferthe Little Children is a novel that I wouldn’t hesitate to recommend to any fanof a well researched and eloquently written historical romance and mystery.
Buy Link:
Reviewed By: Lisa